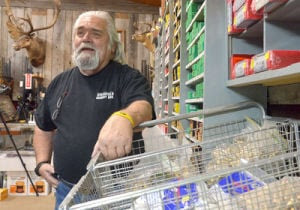 I guess he doesn't consider ARs/AKs for self defense and he's been in business for 36 years?  Maybe he means for a CCW weapon as that's about the only thing that makes sense.

The demand for assault-style weapons is waning and shooters want self-defense weapons, which are in short supply. Blanchard said he’s turned to alternate vendors and sources to supply his store.

Four out of five local weapons and ammunition sellers say shortages caused by government stockpiling, panic buying and hoarding are making it difficult to get stock, and one store now limits purchases to meet local demand.

Arkie Clapier, sporting goods manager at CAL Ranch Store in Pocatello said the store limits the purchase of .22-caliber shells to one brick — 525 rounds — per customer.

“We are in the hoarding mentality,” Clapier said. “Ammo is hard to get and guns are hard to get right now.”