Freddie Gray: This is What Baltimore is Destroying Itself Over 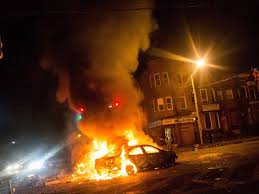 Freddie Gray, 25, a name that will become synonymous with names like Rodney King, Michael Brown and Eric Garner because he died because of injuries alleged to have been inflicted by police. Now a city is tearing itself apart over the death of Gray.

First, take a look at the arrest video following police on bicycle chasing Gray down. At least from the following video, it appears almost like the police have Gray in a hogtied position.