Texas Ranger: “There Are Trains With Shackles On Them” 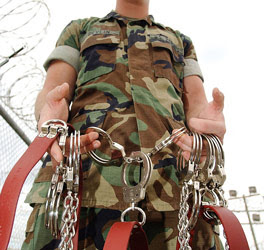 The reports about the coming Jade Helm 15 operation across the southwest continue to suggest that this is not merely a standard training exercise to prepare our military personnel for foreign engagements as has been suggested by officials.

A letter sent to Dave Hodges at The Common Sense Show by a concerned Texas Ranger indicates that the government is preparing for a scenario similar to what has been described in William Forstchen’s recent novella Day of Wrath in which ISIS terrorists cross the southern border of the United States and simultaneously attack soft targets across the nation.

But the letter doesn’t stop there. The Ranger, who has kept his identify private for obvious reasons and makes clear that the scope of Jade Helm is so secret that the intent is not completely clear, says that the JH15 mission objectives may go much farther than just preparing for terrorists. According to the law enforcement insider there are trains moving throughout Texas and some of them have been outfitted with shackles, presumably to “transport prisoners of some sort.” The claim adds further credence to a report about Jade Helm dissident roundups and arrests and widespread martial law declarations following an emergency.