A ’65 Ford Falcon Goes from Junkyard Dog to Prized Pooch 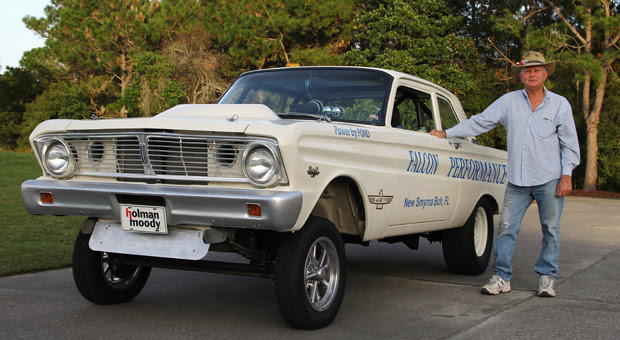 When Charley Carnes bought this 1965 Ford Falcon 2 door sedan in 1991, it was a sad scrappy heap of an animal. It had sat there, abandoned by its owner, neglected in every way, but Charley saw within it a car he’d always dreamed about. A love of the 1960s, particularly those early gassers and A/FX cars had fueled his interests for as long as he could remember, and while others might have seen an impossible task, Charley saw a project. He called it his junkyard dog. He took it in, fed it dollars and watched it grow.

The Falcon 2 was originally equipped with a 6 cylinder engine and “three on the tree.”

When Charlie rescued it for $300, it had miscellaneous NOS parts thrown on as well. Charley also acquired a wrecked, abandoned ‘85 Mercury Capri at the same time, but its carbureted 5.0 engine and a 5 speed transmission were a perfect match for the Falcon. The resurrection was on. But this was only the first engine to go into the beast.