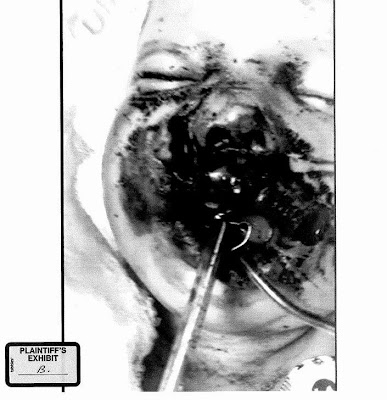 It was the baby’s fault that he was nearly burned to death in his own crib.
Bou-Bou Phonesavanh was barely a year and a half old, just learning to walk, and unable to speak, but those limitations didn’t stop him from engaging in “deliberate, criminal conduct” that justified the 2:00 a.m. no-knock SWAT raid in which he was nearly killed.
The act of sleeping in a room about to be breached by a SWAT team constituted “criminal” conduct on the part of the infant. At the very least, the infant was fully liable for the nearly fatal injuries inflicted on him when Habersham County Sheriff’s Deputy Charles Long blindly heaved a flash-bang grenade – a “destructive device,” as described by the ATF, that when detonated burns at 2,000-3,500 degrees Fahrenheit – into the crib.
Merely by being in that room, Bou-Bou had assumed the risk of coming under attack by a SWAT team. By impeding the trajectory of that grenade, rather than fleeing from his crib, Bou-Bou failed to “avoid the consequences” of that attack.
In any case, Bou-Bou, along with his parents and his siblings, are fully and exclusively to blame for the injuries that nearly killed the child and left the family with more than one million dollars in medical bills. The SWAT team that invaded the home in Cornelia, Georgia on the basis of a bogus anonymous tip that a $50 drug transaction had occurred there is legally blameless.
This is the defense presented by Haberham County Sheriff Joey Terrell and his comrades in their reply to a federal lawsuit filed last February on behalf of Bou-Bou Phonesavanh and his family.
More @ Pro Libertate
Posted by Brock Townsend at Monday, May 18, 2015