Via comment by Anonymous on Police department disbanded after multiple run-ins... 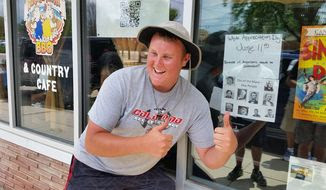 The only thing Steve Adams knew about the Rubbin Buttz BBQ is that its Hispanic owners were hosting “White Appreciation Day” on Thursday, but that was enough to persuade him to make the hourlong drive for lunch.

“It’s nice to know someone else doesn’t think that we’re the enemy,” said Mr. Adams, who lives about 50 miles away in Aurora, as he and his friend Art Babic waited for a table in the packed restaurant.

“We’re all the same,” he said. “It’s only in more recent years that we’ve got everybody separated. So if this is bringing everybody together, it’s a good thing.”