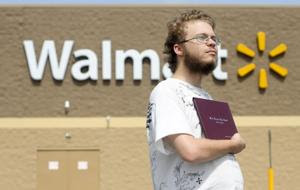 West Morgan High graduate Aaron Browder said he was at a loss for words when he and his mother were turned away from Wal-Mart’s jewelry counter in Decatur and told by an employee his class ring could not be ordered because his high school mascot — the Rebel — is controversial and is a symbol of racism.

“I just stood there and thought, ‘You’ve got to be kidding me,’ ” Aaron Browder said.


But it was no joke. Brenda Browder, Aaron Browder’s mother, said the sales associate at the Wal-Mart on Spring Avenue told them the ring could not be ordered with the school’s name or mascot on it.

“We didn’t even know how to react,” Brenda Browder said. “We stood there looking at each other in complete disbelief, and then we just walked away. It took a while for the anger to set it.”