ISLAMOMANIA’ IN ACTION: Muslim father lets daughter drown rather than have her touched by ‘male’ rescuers 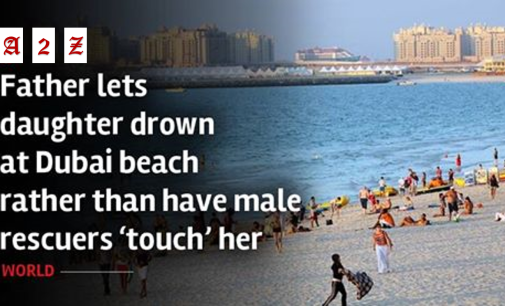 The Muslim father stopped the rescue team from saving her because he preferred she die rather than be ‘dishonored’ by being touched by a strange man.

Irish Mirror  A woman drowned off the coast of Dubai when her father stopped male lifeguards trying to save her because it would ‘dishonour’ her. The man reportedly grappled with lifeguards as they tried to save the 20-year-old woman as he did not want them to touch her. By the time the lifeguards had restrained the father, the woman had drowned.