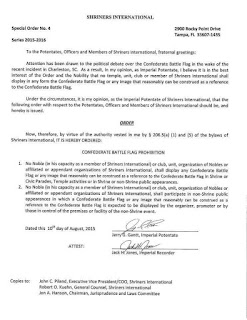 Not only does this order ban the display or use of the Confederate Battle Flag by Shriners, it actually goes so far as to forbid Shriners from participating in any event where one is displayed.

Please contact the Shriners and let them know that you will cease all support until this ridiculous order is rescinded.

"Jerry G. Gantt of Houston is currently serving his 11th year as a member of the Boards of Directors for Shriners International and Shriners Hospitals for Children. Gantt was elected Imperial Potentate, part of the 13-member body that helps govern the Shriners fraternity, during the Shriners’ 2015 Imperial Session—held in Houston July 5 – July 9.

Gantt was raised a Master Mason at Cherryville Lodge #505 in 1971. He is a member of the York Rite, Grotto and was honored with the 33rd Degree of the Scottish Rite. Gantt became a member of Oasis Shriners in Charlotte, N.C., in 1972, and joined Arabia Shriners in Houston in 1980, where he held numerous offices, including chairman of the Five-year Planning Committee. He served as the temple’s Potentate in 2002.

Gantt is a chairman emeritus of Shriners Hospitals for Children — Houston Board of Governors and has served at the Imperial level as Outer Guard Aide, Captain of the Guard Aide, Imperial Marshal Aide and member of the Imperial Dispensations and Charters Committee. During his years as a member of the Boards of Directors, he has served on a number of committees, including Budget, Building and Equipment, Information Systems, Public Relations, Salary, Personnel and Retirement, Planning, Corporate Compliance, Education Seminars, Sports, Research, Medical Affairs, Strategic Planning, Investments and Budget. In addition, he has served as Liaison Officer to the Shriners Hospitals for Children in Philadelphia, Houston, Cincinnati, Montreal, Tampa, Honolulu and Galveston. In addition to his service in the Shriners fraternity, Gantt is an honorary member of the DeMolay Legion of Honor.

Born in Gastonia, N.C., Gantt attended Wingate College in Wingate, N.C. He then joined the United States Marine Corps., where he served as an air traffic controller. He is now President of Piedmont Contractors, Inc., a commercial general contracting firm in Houston.

In his community, Gantt and his wife, Lisa, enjoy NASCAR and the Houston Livestock Show and Rodeo, where they are life-members and Gantt is an active committee member"