NC: God Will Protect Us; God Will Take Care of Us 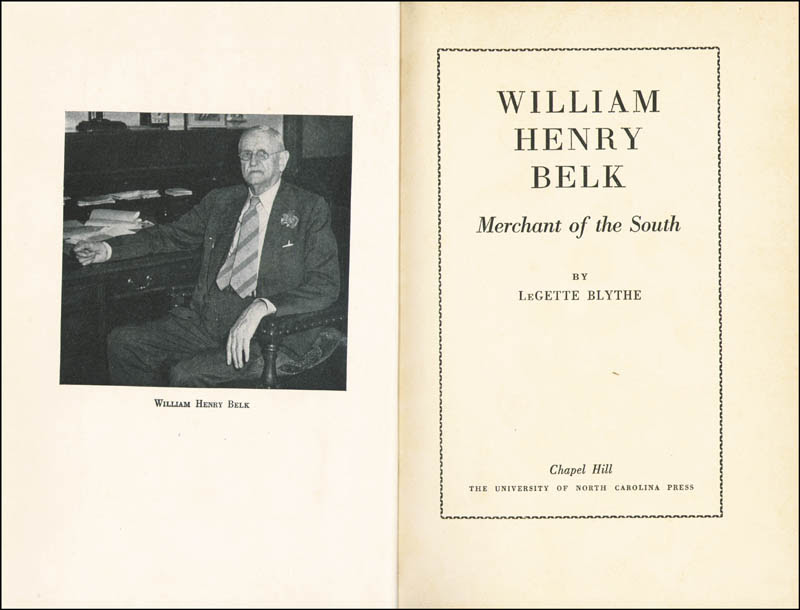 William Henry Belk was a child of three in 1865 when his father Abel was murdered by Sherman’s bummers, leaving his mother Sarah not only a widow but with three babies and several Negro hands to feed and clothe. The industrious William would be working his first job in Monroe, North Carolina at age fourteen, and at twenty-six had started his own business which eventually spread to every State in the South.
Bernhard Thuersam, www.Circa1865.com    The Great American Political Divide

God Will Protect Us; God Will Take Care of Us

“Across more than four-fifths of a century of incredible change William Henry Belk remembers the day his father left home to escape the advancing Federals. It was 1865, and the Confederacy was dragging wearily into its last days. The South was almost prostrate now; even Sarah Walkup Belk’s beloved Waxhaw country, the country of Andrew Jackson, the gallant William Richardson Davie, and her own Wauchope family, lay under the heel and torch of Sherman.

This Federal general . . . was moving north after his march to the sea, pillaging and burning and slaughtering, and in the path of his troops, in the border region between South Carolina and North Carolina, lay the modest home of Abel Washington Belk.

If young Belk, whose weak lungs had prevented his joining the Confederate army, should be found at home, the Belk’s feared that Sherman’s men would steal his property, burn the house, and possibly hang him. If he should leave and hide out with some of the Negroes and the valuables that could be removed, the Yankee marauders might spare the house . . . over the heads of a defenseless young woman and her three babies.

So he loaded up the wagons and took some of the Negroes and they went down to Gill’s Creek some fifteen miles east of Lancaster, South Carolina . . . refugeeing on the creek down there until the Yankees had got out of the country. And it wasn’t long before the Yankees caught a fellow . . . who figured he’d save his own hide and get in their good graces by turning up my grandfather, old man Tom Belk. This scoundrel told them that my grandfather had barrels of gold hid out at his mine . . . .

But old Sherman’s men didn’t come by our house . . . [and] caught my father instead of my grandfather. They asked him where the gold was hid out. He told them he didn’t know. But they thought he was just trying to save his gold. So they took him down to the creek . . . and held him by the feet and pushed his head down under the water.

Then they’d jerk him up and ask again where the gold was. When he’d tell them he didn’t know – which he didn’t – they’d push him down again. That went on several times. His weak lungs couldn’t stand it. I reckon they just filled with water . . . But they did drown him . . . on Gill’s Creek.”

A letter which was written by Henry Belk’s uncle to Sarah Walkup Belk was her first news of the tragedy. It read as follows: “Sister Sarah, I have sad news to tell you. Abel, your husband and my brother, is I suppose no more. He is not found as we know but there is a certain person buried about one and a half miles below here, in Graham’s field, who I suppose is Abel. His clothes were like those that Abel had on [and] Abel’s little mule is lying dead on the road not far from where the man was drowned. [signed] Herron.”

It was a cheerless, somber day when Sarah Walkup Belk turned away from the red mound in old Shiloh graveyard. But even darker were the thoughts that threatened to crush her, for everywhere she seemed to sense the very presence of death.

Beyond the stones of the graveyard . . . lay fields bare and brown and dead, and there was little promise anywhere that the resurrection of spring would provide adequate crops. The Confederacy, too, she knew, was at its death and tired hungry hopeless men could no longer stem the rush of advancing hordes from the north.

And now her husband was dead. What would she do now? Where would she turn? How could she make a living for herself and her three babies? How actually to find enough food?

She went back to her farm and organized what poor efforts she could command. She found food and clothing for herself, her babies and the Negroes. She managed to provide security in those perilous days, joy even and much love. And always she taught her children. Sometimes it seemed that doubt and despair would engulf her. Always when the darkness was heaviest the pinpoint of a star broke through. She held to her faith. And she worked.

When the days were darkest she would repeat over and over again and in staunch faith the prayer and prophecy of that day when without knowing it she had waved her last good-bye to her young husband: “God will protect us; God will take care of us.”