Despite having taken in more than its fair share of immigrants since the 1960s, Europe is now being forced to take in swarms of illegal immigrants fleeing from third-world hell-holes in Africa and the Middle East.

The United Nations, that wretched anti-west viper’s nest, is demanding Europe does more to help the invaders. Amnesty International, an organization originally formed to help prisoners of conscience, also chimed in, proselytizing for the human rights of immigrants without giving a thought for the human rights of Europeans. Obviously, European people don’t have a right to their nations and should just meekly surrender territory and resources. 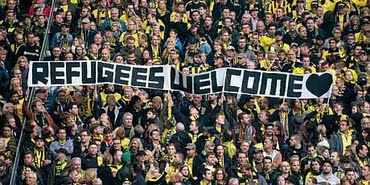 Twelve years ago, it was said that the western armies in Iraq would be welcomed as liberators. (They were - for a while.) Today in Germany, another conquering army are being welcomed as liberators - liberators from the residual moral stain of what remains of ethnic nationalism and cultural identity. Watching European news broadcasts right now is like an insane demotic inversion of the Emperor's new clothes.

"To a fool these thousands of fit young Muslim men appear well dressed and well fed. But a wise man such as Your Majesty can easily see that they are desperate starving refugees in rags." And so as the trains pull in to German railway stations to disgorge men who meet no known definition of "refugees" they are greeted on the platform by volunteers offering food and second-hand clothes. The cameras do their best to alight on a telegenic moppet or a covered woman, but, even when they do, you notice that they're surrounded by a sea of confident vigorous males - who, according to the UN, make up 75 per cent of the "refugees".