Via Billy "Too bad the media is not more concerned about those groups in America which commit 90% of our violent crimes, but only account for 13% of the population & contribute the least to society. Pranks by bored, isolated cadets is somehow more serious?" 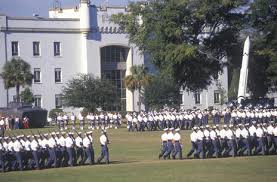 Fourteen cadets have been dismissed, suspended or are receiving on-campus punishments at The Citadel after several of them appeared in photos with pillowcases on their heads similar to Ku Klux Klan garb, the military college’s president said Monday.

The photos of seven freshmen cadets dressed in white pants and shirts while wearing pillowcases surfaced on social media last month. An investigation found the cadets were ordered by upperclassmen to sing Christmas carols dressed in costumes, college president John Rosa, a retired lieutenant general, said in a statement. The photos involved a “Ghosts of Christmas Past” skit.