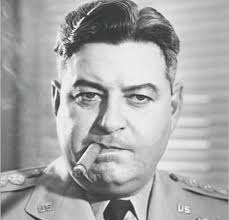 The relatively untold story of the looting of post-WWII Germany is told in Kenneth D. Alford’s “The Spoils of World War Two.” The author writes of Major General Harry J. Collins of the 42nd Rainbow Division, and the standing joke at the time that his battle strategy was “one man fighting, two men looting, and three men painting rainbows.” Collins lived comfortably in a liberated 15th century Prielau Castle in Austria, as did General Mark Clark in Vienna.  The looting of the American South was well underway in mid-1862 as Northern ships brought troops to occupied North Carolina, and returned laden with furniture, art, jewelry and libraries.
Bernhard Thuersam, www.Circa1865.com   The Great American Political Divide

“[I thought] it would take the Germans a hundred years just to dig out of their debris. But they had new cities set up on the old bombed-out sites within five or six years from the time they began. Not everything they did was for the best.

If war’s destruction got rid of a lot of ancient ugliness, as well as wiping out a lot of ancient beauty, the builders demonstrated the usual lack of taste which we show and which other nations show in their embracing of the modern. There are some gosh-awful Hollywood-type-alleged-American-Californian buildings and store fronts adorning the German streets today.

The Germans lost a certain identity, a certain originality and national flavor, when they performed the new building. But the roofs don’t leak; there is heat in the winter.

[My wife and I took over the stripped Henkell] house in Wiesbaden . . . [Gen. Omar] Bradley’s troops had descended on it in the first place, when we invaded Germany in 1945, and I should like to have seen the mansion originally. Folks talked enthusiastically of the objets d’art – rugs, statuary, paintings, everything else. I regret to state in all honesty that, in 1945, when these [American troops] left the house . . . they backed up their trucks and took anything they wanted along. This was the great policy of so-called liberation. It went on all over Germany. Seems rather shocking now to consider it, and it even seemed a little shocking to certain people at the time.

When we arrived in Wiesbaden we met up with a handsome servant, a man in his late twenties, who bowed deeply and greeted us in perfect English: “Good morning, sir and madam. I am so happy you have arrived safely. I am glad to serve you. I am an American bastard.” He was the post-World War I illegitimate son of a German girl; his father was an American.”