Tyranny, Defiance, and the Death of LaVoy Finicum 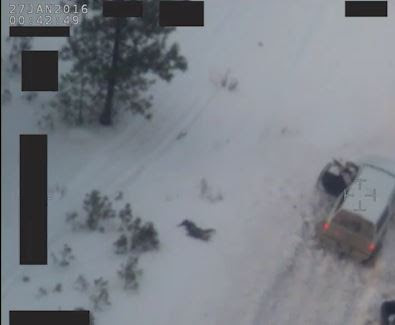 LaVoy Finicum, who was shot at a roadblock by Oregon State Troopers and left to bleed to death in the snow, was not a violent criminal. He and his colleagues from the group calling itself Citizens for Constitutional Freedom were traveling to John Day, Oregon to organize political resistance to federal control over lands in the western United States.


After trying to run the roadblock, Finicum plowed his vehicle into a snowbank. He exited with his hands in the air, staggering in the snow before making a motion with his right hand that the FBI claims was an effort to grab a handgun. Another possibility is that Finicum, as some witnesses claim, was shot while his hands were raised in a posture of surrender, and that his subsequent movements were involuntary.
The carefully planned ambush, which displayed detailed intelligence regarding the plans of Finicum and his friends, was a joint operation between the FBI and the Oregon State Police. It was was not carried out in defense of persons or property, but to enforce the will of those in control of the Regime. Finicum, a 55-year-old rancher from Arizona, had become the subject of a federal warrant after renouncing his grazing contract with the Washington-based usurpers who control range lands in that state.
More @ Pro Libertate
Posted by Brock Townsend at Friday, January 29, 2016