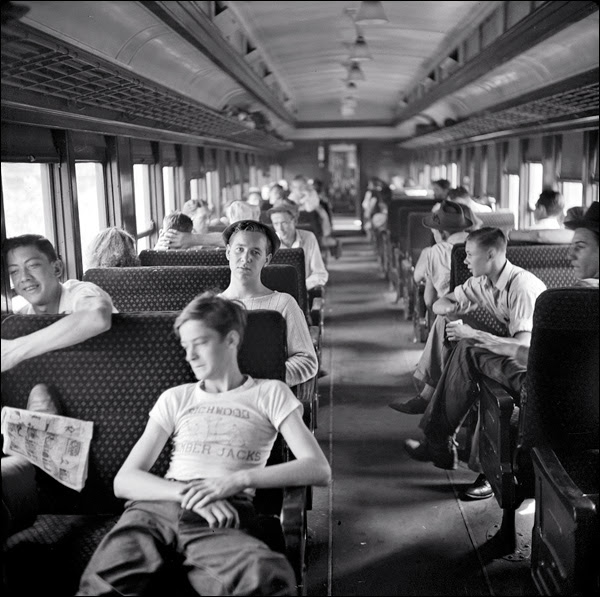 Central West Virginia teens aboard a special Baltimore & Ohio train taking them to farm work in western New York state. They were Victory Farm Volunteers, part of the Crop Corps, where teenagers replaced rural men called up for the armed services or who moved to cities for war jobs in the factories. The unexpected runaway success of home Victory Gardens also alleviated shortages of produce on the home front. Both programs, farm volunteers and home gardens, were retreads from World War I.

Taki's Magazine - What truly makes the future nightmarish for American blacks is the prospect that the white “ruling class” will eventually be displaced by (or will meld with) a new demographic of whites—white Hispanics—who are immune to every trick in the “how to get what you want” handbook of the professional black complainers. For a community that has progressed very little in terms of overall strategy beyond “yell at white people until they kiss the boo-boo, make things better, and reward you with a lollipop,” this is a very bleak future indeed. I am unconvinced that the black community will be able to adapt to it, but I think many can see it coming all the same.

Information Liberation - 17yo Burglar Killed During Home Invasion, Relatives Ask How Else Is He 'Gonna Get His Money'?

Washington Times - A top Homeland Security official told Border Patrol agents the Obama administration has “no intention of deporting” many of the illegal immigrants caught trying to sneak into the country, ordering instead that they be released.

American Digest - The New Knock-Out Game: What Kind of Perps Could Possibly Be Doing This? Reporters Unclear.

SHTF Plan - It is not uncommon for a society to wade through almost a decade or more of violent decline before finally acknowledging the system is imploding on a fundamental level. It is also not uncommon for societies to endure years of abuse by corrupt governments before either organizing effectively to rebel, or caving in and submitting to totalitarianism. How does a person know if they are in the middle of a collapse rather than on the “verge” of collapse? Here are some signals I have derived from research of various breakdowns in modern nations and why they indicate we are experiencing collapse right now

National Review - Commentators on MSNBC and CNN have been shedding crocodile tears over Donald Trump’s “divisive rhetoric” and lamenting his failure to unify the country. This sudden concern for national unity is rather hard to take from the same worthies who have incessantly glorified the Black Lives Matter movement over the last year and a half. To the mainstream media, Black Lives Matter’s claims and academic identity politics are not “divisive,” they are simple truth. But if you don’t accept those truth claims — and the data refute them — the vitriolic anti-cop rhetoric of the last year and a half, and its underpinning in academic victimology, easily match the alleged divisiveness of anything that Trump has said.
Posted by Brock Townsend at Tuesday, March 22, 2016