Why the Museum of the Confederacy Exists 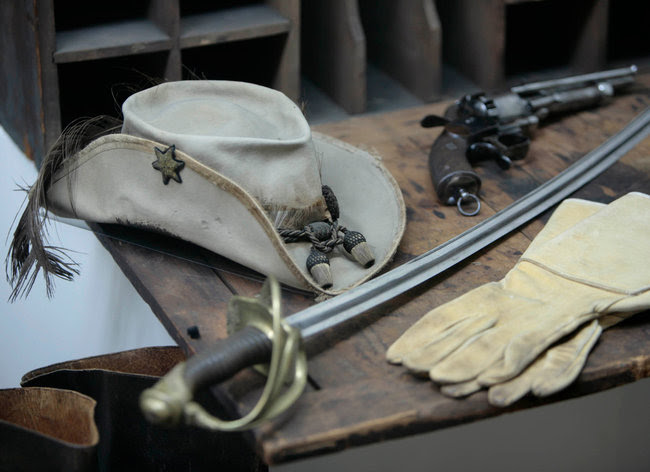 Personal artifacts from Gen. J. E. B. Stuart.
The documents and presentations at the time the Museum of the Confederacy was created in Richmond clearly define why it exists and in whose memory it is dedicated. The clear intent was that “their immortal deeds and the evidences of their achievements will be preserved in the old home of the President of the Confederacy, where they will remain throughout generations and for all time.”
Bernhard Thuersam, www.Circa1865.com   The Great American Political Divide

Why the Museum of the Confederacy Exists

“The Davis Mansion Formally Thrown Open for the Reception of Relics

THE BATTLE ABBEY OF THE CONFEDERATE STATES

The dawn of February 22, 1896 was auspicious — assuredly, in the historic city of Richmond. Old Sol rose in all the vaunted splendor of Italy’s skies. All nature was calm and serene. Who will say that it was not the approving smile of the Lord of hosts upon the truly reverential efforts of our most excellent women in the perpetuation of the truth–the treasuring of evidence and of memorials of the righteousness of the grandest struggle for constitutional right which has ever impressed the page of history?

A representative building of the period in Richmond, the most happy probably in the exemplification of intellectual worth, of social grace and substantial comfort, was the residence of the Chief Magistrate of the Confederate States, whilst they blazed into undying glory. This memorable edifice, the patient, devoted women of Richmond undertook to restore enduringly to its original conditions of form, with the sacred purpose of dedicating it to the preservation of the materials of history and hallowed memorials of Southern heroism and sacrifice.

The natal day of Washington was happily chosen for the opening of the building as the Confederate Museum, and to commemorate the formation of an institution for the preservation of the records of glorious deeds of the Southern sons who went forth to battle in defense of honor, truth and home; and the foundation of a permanent repository for the relics of the war between the States.

The former home of Jefferson Davis, the President of the Confederate States, is a most appropriate place for the location of the Confederate Museum. Situated in the very heart of the capital of the Confederacy, the institution is where it will inspire the pride and interest of every Southern man, woman and child, and will be accorded the loving and tender watchfulness of a fond and patriotic people.

When the City Council gave the Jefferson Davis Mansion to the Confederate Memorial Literary Society for a museum, that organization undertook a high and noble work, the consummation of which on yesterday was a brilliant climax to five years of undaunted energy expended in getting the building into proper condition for the change from a public school-house to a place for the reception of Confederate relics and records. The ladies of the Society have done their work well. The old soldiers may pass away, but their immortal deeds and the evidences of their achievements will be preserved in the old home of the President of the Confederacy, where they will remain throughout generations and for all time.

“I think I can say boldly that the bloody strife of 1861 to 1865 developed in the men of the South traits of character as ennobling and as exalting as ever adorned men since the day-dawn of creation. I think I can proclaim confidently that for courage and daring chivalry and bravery, the world has never seen the superiors of the Southern soldiers. I think I can proclaim triumphantly that, from the South’s beloved President, and the peerless commander of her armies in the field, down to the private in her ranks, there was a display of patriotism perhaps unequalled (certainly never surpassed) since this passion was implanted in the human breast.”

“To-day commemorates the thirty-fifth anniversary of the inauguration of the last rebel President and the birthday of the first. It commemorates an epoch in the grandest struggle for liberty and right that has ever been made by man. It celebrates the baptism of a new nation born thirty-five years ago to-day. I believe our first and most sacred duty is to our holy dead, to ourselves, and to our posterity.

It is our highest obligation to satisfy the world of the righteousness of our cause and the sound judgment with which we defended it. And we injure ourselves, we impair the moral of our side by incessant protestations of our loyalty to the victor and continuous assertions of respect for his motives of forgiveness, for his conduct, and of belief in the nobility of his faith.

There never can be two rights, nor two wrongs — one side must be right, and therefore, the other is, of course, wrong. This is so of every question of morals and of conduct, and it must be pre-eminently so of a question which divided millions of people, and which cost a million of lives. The world is surely coming to the conclusion that the cause of the Confederacy was right. Every lover of liberty, constitutional liberty, controlled by law, all over the world begins to understand that the past was not a war waged by the South in defense of slavery, but was a war to protect liberty, won and bequeathed by free ancestors.

Virginia never seceded from the Union. She resisted invasion of rights, as her free ancestors for 800 years had done with arms and force. Before the ordinance of secession was voted on, Virginia was at war with the Northern States, and all legal connection had been broken with them by their own act in the unlawful invasion of her soil. It is this constant and growing consciousness of the nobleness and justice and chivalry of the Confederate cause which constitutes the success and illuminates the triumph we commemorate to-day. Evil dies; good lives; and the time will come when all the world will realize that the failure of the Confederacy was a great misfortune to humanity, and will be the source of unnumbered woes to liberty.

There were more rebel brigadiers killed in battle for the Confederacy than in any war that was ever fought. When such men and women have lived such lives, and died such deaths in such a cause, their memories will outlast time. Martyrs must be glorified, and when the world knows and posterity appreciates that the war was fought for the preservation and perpetuation of free government, of government by the people, for the people, and to resist government by force against the will of the people, then the Confederacy will be revered like the memories of Leonidas at Thermopylae, and Kosciusco and Kossuth, and all the glorious armies of martyrs.

Our memorial will be here in Richmond . . . it is a memorial of no “Lost Cause.” [We] were right, immortally right, and [the] conqueror was wrong, eternally wrong. The great army of the dead are here, the sentiment of the living is here, the memories of the past are here, the monuments of the future will be here. The memorial of the Confederacy is here, not built by hands — made by memory and devotion! What else could it be?”