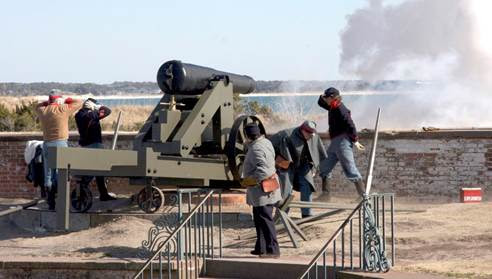 The Fort Macon cannons successfully thwarted the Union naval vessels from doing much damage to the fort during the Civil War.

More Pictures
The siege and capture of Fort Macon will be played out in three separate re-enactments this weekend as Fort Macon State Park hosts one of the signature events of the centennial celebration of North Carolina’s State Park system.

“This is the biggest re-enactment we’ve ever had. We’ve got three battles planned, two on Saturday and one on Sunday,” Fort Macon State Park Superintendent Randy Newman said.

An estimated 400 re-enactors will be in attendance.

Throughout 2016, North Carolina State Parks will be celebrating its centennial with a series of events and ceremonies. This weekend’s lineup of activities at Fort Macon State Park is the first of several signature events.

The Fort Macon celebration begins today and continues through Sunday.