Via comment by Anonymous on The truth about the late Jo Cox MP and her husband... 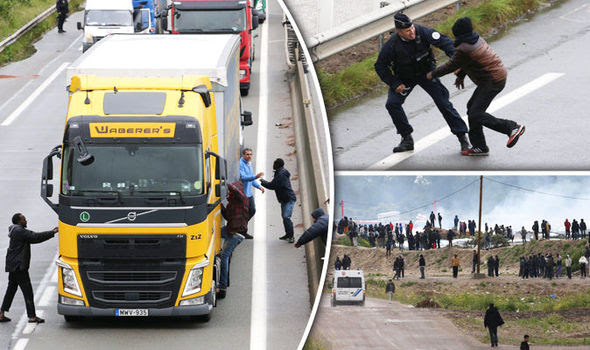 HUNDREDS of migrants shouting "f*** the UK" have stormed the roads in and around Calais and hurled rocks at British motorists in a desperate attempt to reach the UK before Britons decide whether or not to leave the EU.

French police battled around 300 migrants in the lawless port town this afternoon after huge mobs targeted England and Wales fans returning across the Channel after cheering on their teams at Euro 2016 and motoring enthusiasts driving back from the Le Mans rally event.

Gangs of migrants ran out onto the motorway and brought traffic to a standstill outside the port, so that they could break into lorries and stow away in an attempt to sneak across the Channel.

A British football fan caught up in the chaos reported that gangs of migrants were shouting "f*** the UK" as they hurled rocks at his car, posting photos on social media of clouds of tear gas fired by embattled police.