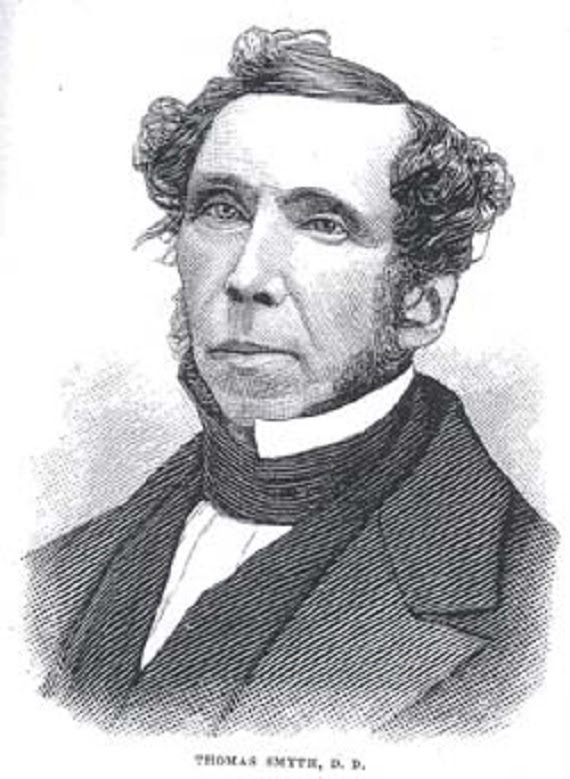 “The parties in this conflict are not merely Atheists, Socialists, Communists, Red Republicans, Jacobins on the one side, and the friends of order and regulated freedom on the other. In one word, the world is a battle-ground, Christianity and atheism the combatants, and the progress of humanity the stake.”
-- James Henley Thornwell

Lately there has been mention of Dr. Thomas Smyth in two Abbeville Institute blog and review posts, namely, “The Theology of Secession” by M. E. Bradford, and “What Lincoln’s Election Meant to the South” by Bradley J. Birzer. Having written about this Charleston clergyman in an upcoming book, I thought our readers might be interested in learning a little more about him.

Thomas Smyth (1808-1873), a native of Ireland, came to America as a young man and attended Princeton Theological Seminary. In 1831 he accepted a call from Second Presbyterian Church in Charleston, South Carolina, where he would serve as pastor for several decades. Upon his arrival in the city he was befriended by James Adger, a wealthy Charleston businessman and a fellow native of Belfast. Smyth soon developed an attachment to Adger’s daughter Margaret and married her in 1832.

The Adgers were a devout family, and when Smyth’s brother-in-law James B. Adger returned to Charleston from foreign mission work in 1847, he dedicated his life to “the religious instruction of the negroes in Charleston.” Lamenting an inadequacy in “church accommodations” for them, as well as “a want of suitable instruction,” Adger, Dr. Smyth, and others advocated the establishment of a “separate colored church.” The Episcopalians had already had organized Calvary Church in Charleston for this purpose, and though it initially met with opposition by some of the white citizens, the congregation (which included white members) flourished.