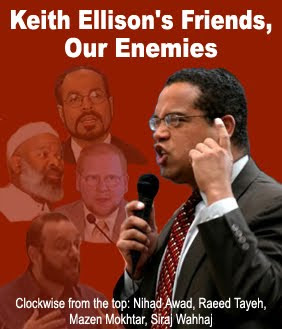 Rep Keith Ellison (D, MN) was the first Muslim to be elected to the U.S. Congress and was sworn into office using a Koran in 2007. Ellison was a follower of Louis Farrakhan’s Nation of Islam but in recent years converted to orthodox Sunni Islam. He has been a strong supporter of the Council on American-Islamic Relations (CAIR), and CAIR and associated Muslim Brotherhood (MB) members have generously supported his political campaigns. The huge Somali refugee population placed in Minneapolis by the State Department and the HHS Refugee Resettlement Department is his strongest constituency.

On November 19, he announced his candidacy for Chairman of the Democratic National Committee, replacing Donna Brazile. Ellison has already received the endorsement of Senator Chuck Schumer, leader of the Senate Democratic Caucus, Harry Reid, Liz Warren, Bernie Sanders, new Illinois Senator Tammy Duckworth, and 10 other Congress members. Ellison is known even in the Democratic Party as radical in his pro-Palestinian and anti-Israel views. However, the Democrats may be too addicted to laundered Arab-oil campaign contributions to put up much resistance to Ellison as DNC Chairman. I agree with Frank Gaffney, President of the Center for Security Policy. Ellison would be the first Muslim Brotherhood DNC Chairman. Ellison does have some competition, including former DNC Chairman Howard Dean. The radicalization of the Democratic Party makes it imperative that ordinary American voters know the truth about Islam, the Muslim Brotherhood, and CAIR.