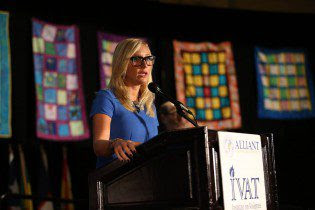 A Democrat Florida state lawmaker helped pass a bill that allocated $1.5 million to a nonprofit that she founded and pays her a six-figure salary, $135,000, and the state’s Republican governor approved it. The legislator, state Senator Lauren Book, represents south Florida’s Broward county and in 2007 she founded a charity called Lauren’s Kids to educate adults and children about sexual abuse prevention through school curricula, awareness campaigns and speaking engagements.

Book launched the south Florida-based group because her female nanny sexually abused her for years and she wants to prevent sexual abuse through education and awareness. The politician also wants to help survivors heal with guidance and support. “Armed with the knowledge that 95 percent of sexual abuse is preventable through education and awareness, Lauren has worked to turn her horrific personal experience into a vehicle to prevent childhood sexual abuse and help other survivors heal,” according to the charity’s website. Lauren’s Kids has helped advocate for the passage of nearly two dozen laws to support survivors and protect children from predators, the group’s website further claims.