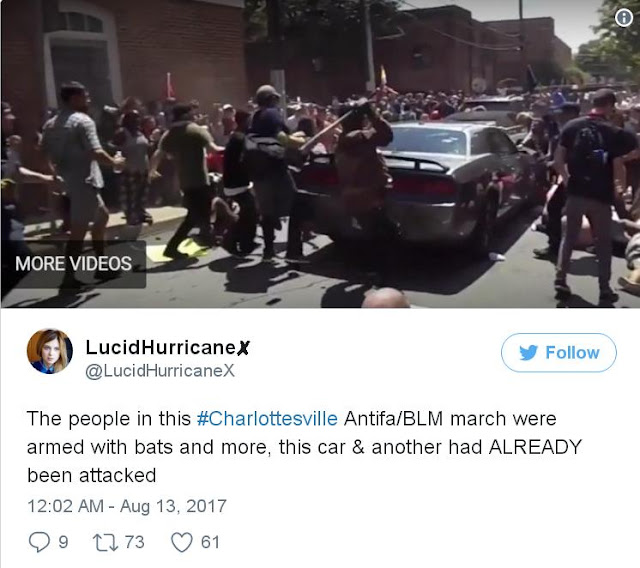 "Charlottesville Was A Total Setup."
As everyone who cares now knows, the “Unite the Right” rally in Charlottesville, Virginia that was held this past Saturday “turned violent.”

It “turned violent” just as did so many of Donald Trump’s campaign rallies, the “free speech” rallies that have been held over the last seven or so months, and Trump’s inauguration.

Of course, it is only within the fantasyland of the Fake News media that any of these rightist (or pseudo-rightist) events “turned violent.” The latter is one of the many stock phrases that Fake Media trots out whenever it is leftist “counter-demonstrators”—another of its terms of choice—crash the events in question with every intention of stopping them by whichever means necessary.

The happenings that unfolded in Charlottesville on Saturday fall all too neatly into a pattern stretching back for the better part of two years, a pattern that has become nearly an ironclad law.

Listening to the coverage of Charlottesville, one could be forgiven for thinking that those in Big Media, whether “liberal” or “conservative,” were oblivious to the existence of this phenomenon.

Commentators struck the unprejudiced observer as either scandalously ignorant or just as scandalously (but predictably) dishonest.  Particularly disappointing were “conservative” commentators and showboating politicians who appeared every bit as immersed in the Big Media bubble that they accuse their “liberal” counterparts of inhabiting.