All The Statues Must Go 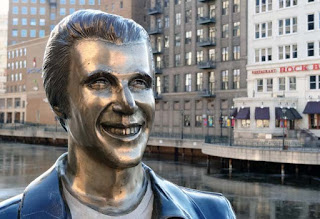 Back in May, a New Orleans statue of Joan of Arc was tagged with “Tear it Down” graffiti.

Why Joan of Arc? Any famous historical figure is by definition controversial. Joan is a French
national symbol, but Shakespeare depicted her as a malicious witch. The French Quarter where the statue stands is a mostly white neighborhood. France was dealing with a controversial election.

This is what happens when you open a can of historical, religious and nationalistic worms.

The war on Confederate memorials quickly escalated into attacks on Abraham Lincoln. The Lincoln Memorial was vandalized in Washington D.C. and in Chicago, a statue of Lincoln was burned.

Abraham Lincoln fought the Confederacy. But from a black nationalist perspective, Lincoln and Lee were both racist white devils. And to the left, they both embody white supremacy.