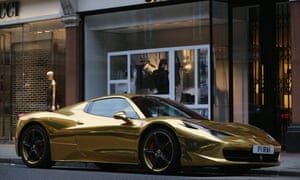 The world’s super-rich hold the greatest concentration of wealth since the US Gilded Age at the turn of the 20th century, when families like the Carnegies, Rockefellers and Vanderbilts controlled vast fortunes.

Billionaires increased their combined global wealth by almost a fifth last year to a record $6tn (£4.5tn) – more than twice the GDP of the UK. There are now 1,542 dollar billionaires across the world, after 145 multi-millionaires saw their wealth tick over into nine-zero fortunes last year, according to the UBS / PwC Billionaires report.

Josef Stadler, the lead author of the report and UBS’s head of global ultra high net worth, said his billionaire clients were concerned that growing inequality between rich and poor could lead to a “strike back”.

“We’re at an inflection point,” Stadler said. “Wealth concentration is as high as in 1905, this is something billionaires are concerned about. The problem is the power of interest on interest – that makes big money bigger and, the question is to what extent is that sustainable and at what point will society intervene and strike back?”

Stadler added: “We are now two years into the peak of the second Gilded Age.”