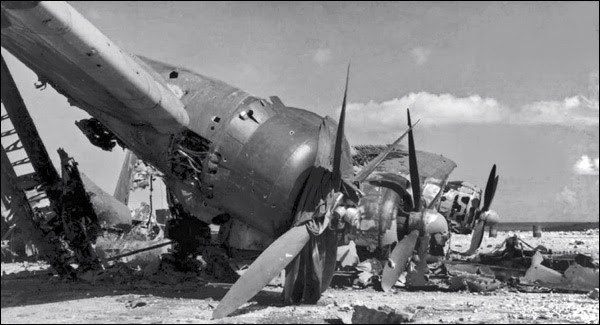 After taking Saipan in July 1944, Navy Seabees bulldozed wrecked aircraft into a pile to clear the airfield. Saipan became home base for the 21st Bomber Command's B-29s.


The quote for this week comes from C.S. Lewis. He speaks of evil:

It is not done even in concentration camps and labour camps. In those we see its final result. But it is conceived and ordered (moved, seconded, carried, and minuted) in clean, carpeted, warmed and well-lighted offices, by quiet men with white collars and cut fingernails and smooth-shaven cheeks who do not need to raise their voices.

Second, about identity politics and the escalating power struggle:

There will be war. War is inevitable, and it will probably take place on a global scale. There has never been any movement of people of human history even one-tenth as large as the post-1965 invasion of the United States that has not either a) led to war, or b) been imposed by lethal force as the result of war. I believe the die is already cast, as do more than a few military historians of my acquaintance.

Watts Up With That - National Geographic admits they were wrong about “starving polar bear” video ... they knew that he was sick or injured, but presented it as an effect of climate change

Spectator - America’s Next Civil War Will Be Worse Than Our Last ... of that we can be sure

Paradigm shifts, Traditional Right - The Establishment either believes in cultural Marxism (most democrats) or is too cowardly to challenge it (most Republicans). Heartland voters are fed up with it, its advocates, and its sacred “victims” groups. In a political battle between the coastal elites and their clients on the one hand and the heartland on the other, the heartland will win. Look at the percentage of whites among people who actually vote in all the swing states. The collapse of white acquiescence in cultural Marxism, both here and in Europe, may be the biggest paradigm shift of them all. Faced with irrelevance, the Establishment howls, froths at the mouth and chews the carpet.

Winning, Market-Ticker - It's a shibboleth that when you engage in a trade war nobody wins. The problem is that it's not working that way. Do not believe for a second that trade wars cannot be "won." They can be and they are being, right now. The EU is screaming because they know good and damn well that the claims of "everyone loses" was and is a lie. The EU auto manufacturers know that they either have to drop their tariffs and restrictions on American cars or lose a good part of their export market here in the US. The Chinese want to steal all our intellectual property and sell our corporations slave labor, and call this 'free trade'. Its theft and fraud, and anything that threatens their gravy train is thus "bad" from their point of view.
Posted by Brock Townsend at Monday, July 30, 2018