A User’s Guide to the Supervision of Morning Lake Chapala at sunrise. It never looks the same twice. Though it is late in the season and should be chill, we do not seem to be having winter this year. The golondrinas, swallows, seem confused and have not migrated as early as they usually do. This year they sat in their thousands, three inches apart, on overhead cables and seemed to wonder what to do. Finally they left. Vifoto.

Before light we awake. The dogs, knowing that they are going for a walk, leap and twirl and bounce and make nuisances of themselves. Violeta brews coffee to rekindle the guttering flame of life.

(That’s poetic. Like Milton.) We attach their leashes. They jump into the back of the CRV with enthusiasm. Vi bluetoothes her phone to the car’s sound system, surprisingly good, and we head out to Beethoven or Louisiana blues. 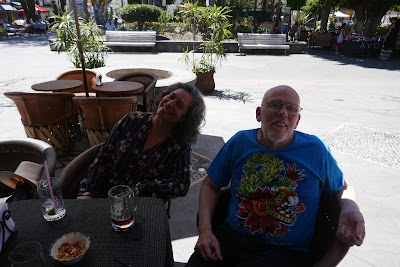 Numerous links/pictures of the time I spent there in the spring.
Posted by Brock Townsend at Monday, November 25, 2019