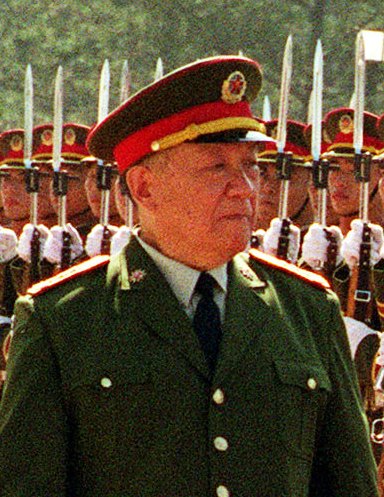 I can find nothing online that disputes this.

Chi Haotian was the defense minister of China from 1993-2003. He was also vice chairman of the Chinese Communist Party’s Central Military Commission. He delivered the following speech to a select group of high level party cadres.

As explained in Gen. Chi’s speech, the Chinese Communist Party’s intention is to militarily defeat, occupy, and colonize the United States. This plan has been confirmed by a Russian defector source who worked in China and had information about a joint Sino-Russian plan to invade North America. This plan was drawn up in 1992, after the fall of the Soviet Union. The division of spoils was described thus: “Russia would get Alaska and parts of Canada. China would get the lower 48 states, with other countries invited in for ‘looting rights.’”

The speech was translated into English and first published by the EPOCH TIMES in 2005.

Comrades,
I’m very excited today, because the large-scale online survey sina.com that was done for us showed that our next generation is quite promising and our party’s cause will be carried on. In answering the question, “Will you shoot at women, children and prisoners of war,” more than 80 percent of the respondents answered in the affirmative, exceeding by far our expectations.