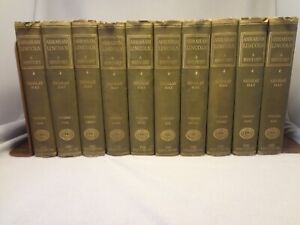 Lincoln's attitude towards Southern States on February 3, 1865, as related by reconstructionist Seward who hated white people:
{
Mr. Seward called attention to that phrase of his annual message where he had declared, "In stating a single condition of peace, I mean simply to say that the war will cease on the part of the Government
whenever it shall have ceased on the part of those who began it." As to the rebel States being admitted to representation in Congress, "Mr. Lincoln very promptly replied that his own individual opinion was, they ought to be. He also thought they would be; but he could not enter into any stipulation upon the subject. His own opinion was that when the resistance ceased and the National authority was recognized, the States would be immediately restored to their practical relations to the Union."
}

Another indication of Lincoln's attitude towards the conquered South:
{
On the evening of February 5, 1865, Lincoln called his cabinet together and read to them the following draft of a message and proclamation, which he had written during the day, and upon which he invited their opinion and advice:

Fellow citizens of the Senate and House of Representatives: I respectfully recommend that a joint resolution, substantially as follows, be adopted, so soon as practicable, by your honorable bodies: "Resolved by the Senate and the House of Representatives of the United States of America in Congress assembled, That the President of the United States is hereby empowered, in his discretion, to pay $400,000,000 to the States of .... in the manner and on conditions following, to wit: The payment to be made in 6% Government bonds, and to be distributed among said States pro rata on their respective slave population as shown by the census of 1860
}

This guy didn't want rob them blind, he wanted to give them money for the negroes. The reconstructionists had to act quickly and remove Lincoln from the way. With a President like this in office, there could not have been Stevens-Sumner reconstruction act. And this president had wide support behind him; much wider support than behind Thaddeus or Sumner. Against Lincoln they couldn't have organized an impeachment revolt.