The fiscal cliff: While the government teeters, investment jumps off 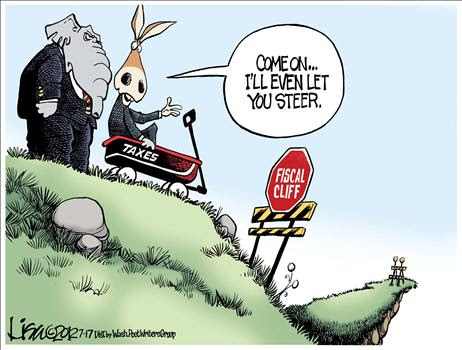 Excellent news, everybody: American businesses are now scaling back on investment plans at the fastest pace since the official recession — and seeing as how investment is a very basic and key driver of economic growth, I’d say that that doesn’t bode too well for our weaksauce ‘recovery.’ Who could’ve seen this coming?


Half of the nation’s 40 biggest publicly traded corporate spenders have announced plans to curtail capital expenditures this year or next, according to a review by The Wall Street Journal of securities filings and conference calls.

Nationwide, business investment in equipment and software—a measure of economic vitality in the corporate sector—stalled in the third quarter for the first time since early 2009. Corporate investment in new buildings has declined. …

Corporate executives say they are slowing or delaying big projects to protect profits amid easing demand and rising uncertainty. Uncertainty around the U.S. elections and federal budget policies also appear among the factors driving the investment pullback since midyear. It is unclear whether Washington will avert the so-called fiscal cliff, tax increases and spending cuts scheduled to begin Jan. 2.

Companies fear that failure to resolve the fiscal cliff will tip the economy back into recession by sapping consumer spending, damaging investor confidence and eating into corporate profits. A deal to avert the cliff could include tax-code changes, such as revamping tax breaks or rates, that hurt specific sectors.