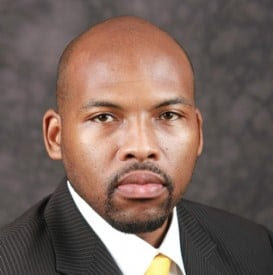 A Florida college professor causing national outrage for requiring students to write “Jesus” on a piece of paper, then put it on the floor and stomp on it, turns out also to be a top official in the local Democratic Party – the latest in a string of acute leadership embarrassments.

Although one student who refused to participate claims he was punished by being suspended from the class, Florida Atlantic University is defending the controversial assignment.

The dissenting student, Ryan Rotela, told the local CBS TV affiliate WPEC that his instructor, associate professor Deandre Poole, told everyone in the class to write the word “Jesus” on a piece of paper in bold letters, then put it on the floor and stomp on it.

Rotela, a junior from Coral Springs, said some of his classmates complied, but he refused.

“Anytime you stomp on something it shows that you believe that something has no value. So if you were to stomp on the word Jesus, it says that the word has no value,” he told WPEC.

A religious Mormon who attends church every Sunday, Rotela complained to school officials but said they responded by suspending him from the class.