The Temper of Southern Women 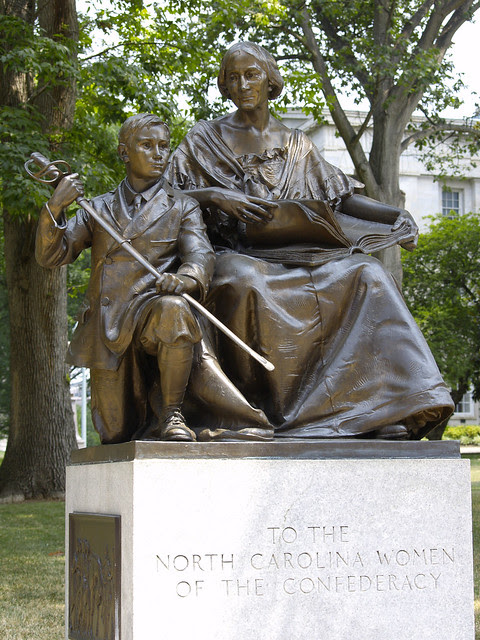 Southern women during the war were known to have destroyed their precious libraries than to allow Northern occupiers to enjoy its contents, as well as knocking in the heads of wine casks rather than permitting Northern soldiers to sample their choice contents. The author of the following was born in Indiana, migrated to Virginia in 1857 and later served in the Nelson (Virginia) Light Artillery.
Bernhard Thuersam, Chairman
North Carolina War Between the States Sesquicentennial Commission
www.ncwbts150.com
"The Official Website of the North Carolina WBTS Sesquicentennial"

The Temper of the Women:

“During the latter part of the year in which the war between the States came to an end, a Southern comic writer, in a letter addressed to Artemus Ward, summed up the political outlook in one sentence, reading somewhat as follows: “You may reconstruct the men, with your laws and things, but how are you going to reconstruct the women? Whoop-ee!”

Now this unauthorized but certainly very expressive interjection had a good deal of truth at its back, and I am very sure that I have never yet known a thoroughly “reconstructed” woman. The reason, of course, is not far to seek.

The women of the South could hardly have been more desperately in earnest than their husbands and brothers and sons were, in the prosecution of the war, but with their women-natures they gave themselves wholly to the cause.…to doubt its righteousness, or to falter in their loyalty to it while it lived, would have been treason and infidelity; to do the like now that it is dead would be to them little less than sacrilege.
I wish I could adequately tell my reader of the part those women played in the war.  If I could make these pages show half of their nobleness; if I could describe the sufferings they endured, and tell of their cheerfulness under it all; if the reader might guess the utter unselfishness with which they laid themselves and the things they held nearest their hearts upon the altar of the only country they knew as their own, the rare heroism with which they played their sorrowful part in a drama which was to them a long tragedy;
[I]f my pages could be made to show the half of these things, all womankind, I am sure, would tenderly cherish the record, and nobody would wonder again at the tenacity with which the women of the South still hold their allegiance to the lost cause.

Theirs was a particularly hard lot. The real sorrows of war, like those of drunkenness, always fall more heavily upon women. They may not bear arms. They may not even share the triumphs which compensate their brethren for toil and suffering and danger. They must sit still and endure. The poverty which war brings to them wears no cheerful face, but sits down with them to empty tables and pinches them sorely in solitude.
After the victory….[the] wives and daughters await in sorest agony of suspense the news which may bring hopeless desolation to their hearts. To them the victory may mean the loss of those for whom they lived and in whom they hoped, while to those who have fought the battle it brings only gladness.  And all this was true of Southern women almost without exception.

[The] more heavily the war bore upon themselves, the more persistently did they demand that it should be fought out to the end. When they lost a husband, a son, or a brother, they held the loss only an additional reason for faithful adherence to the cause. Having made such a sacrifice to that which was almost a religion to them, they had, if possible, less thought than ever of proving unfaithful to it.”