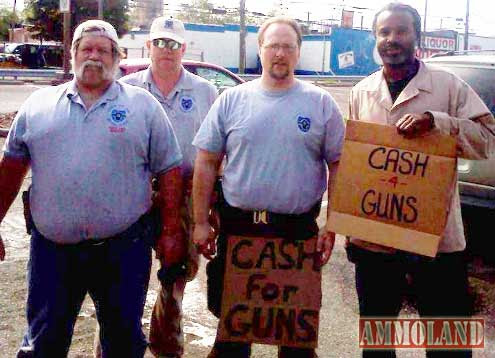 This past Saturday, May 18th, 2013, approximately 50 gun rights activists attended a “Guns for Groceries” event to stage a demonstration of their own against the Wayne County (MI) government.

The Wayne County Executive Robert Ficano and the Wayne County Sheriff Benny Napoleon teamed up with a local church (The New St. Paul Tabernacle Church of God in Christ), the Meijer’s grocery store chain, and the Goodman-Acker law firm to entice citizens to turn in their guns on a “no questions asked” basis.

All month long commercials were being run over the airwaves seeking to convince Detroit residents that the cause of the violence in their town was guns owned by them. Thus, if they wanted to reduce the amount of violent crime in Detroit, the “obvious” solution floated by the local county government was for everybody to sell their firearms for a $50 gift card to buy groceries at Meijer’s.

Local Detroit gun rights activists, however, know the truth about these “guns for goods” program ran by local governments all across our country:
Accordingly, gun rights activists who are members of a variety of local organizations (e.g. Legally Armed in Detroit, Michigan Open Carry, Inc., Michigan Gun Owners, and Michigan Coalition of Responsible Gun Owners) set up for business in the parking lot of a local fast-food restaurant located next door to the church. Activists made sure that they were equipped to comply with current state law by having either a Michigan Concealed Pistol License or a Michigan Pistol Purchase Permits and Michigan Pistol Sales Record Forms.

The protest was an instant success: Cars that carried people looking for the church had to drive by the gun rights activists in the parking lot. As such, many people pulled over and were willing to part with their firearms for cash, often more than $50, instead of a gift card for groceries.