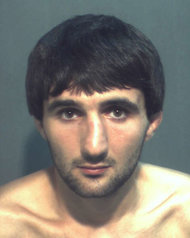 The officers — who included an F.B.I. agent from the Boston field office and two Massachusetts state troopers — were questioning the man, Ibragim Todashev, about whether he had played a role in a triple murder on Sept. 11, 2011, in Waltham, Mass., which had been one of the biggest mysteries in the aftermath of the bombings.

The officers had been interviewing Mr. Todashev in his apartment for some time when he tried to attack them, the official said. The shooting occurred in a sprawling condominium complex in Orlando less than a mile from an entrance to Universal Studios, where many of the residents work. On Wednesday, several streets in the complex were blocked off by federal and local law enforcement officials.

“The investigators were working on the theory that he and Tamerlan,” had played a role in the murder, said the official, referring to Tamerlan Tsarnaev, the deceased marathon bombing suspect. One of the victims was a friend of Mr. Tsarnaev.