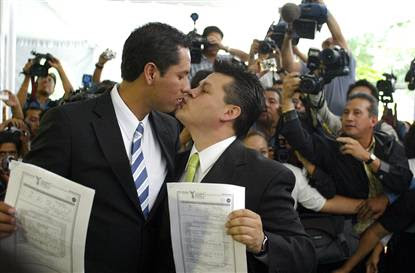 In the aftermath of both the Fast and Furious and Associated Press scandals, Eric Holder’s Justice Department is afforded little credibility in performing its prescribed duties.  Still, it appears the department tasked with upholding constitutional law reached the height of hypocrisy by issuing guidelines to employees that blatantly abridge their First Amendment rights.

The document, which concerns gay and lesbian “inclusion” in the workplace, goes much further than merely protecting employees from discrimination.  Language drafted by the DOJ clearly coerces staff members at all levels to openly support a lifestyle they might find morally objectionable.

While Christians and others with traditional values have long been told, explicitly or implicitly, to remain silent on the issue of alternative sexuality – effectively excluding one group in favor of another.  That constituted an injustice in and of itself; but, the internal guidelines issued by the DOJ is forcing employees to affirmatively support the lifestyle.  “Silence will be interpreted as disapproval,” the document warns.

The liberty-crushing guidelines do not require much commentary, as anyone who values free speech should be appalled by the list of accepted behavior contained therein.  Staff members are expected to place a “DOJ Pride” sticker or some other pro-gay paraphernalia in their offices “indicating that it is a ‘safe space’” while “gender-specific terms like ‘husband’ and ‘wife’” are unacceptable.  Workplaces should be concerned with providing equal opportunity to employees and openly catering to a politically favorable group does exactly the opposite.  No employer – least of all the Justice Department! – should be allowed to unilaterally impose one viewpoint onto an entire staff. That is exactly what the department has implemented, though, as it goes much further than merely protecting the civil rights of gays.