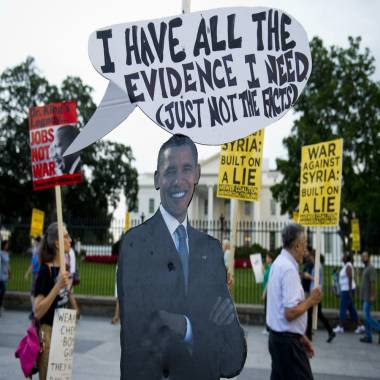 Nearly 80 percent of Americans believe President Barack Obama should receive congressional approval before using force in Syria, but the nation is divided over the scope of any potential strike, a new NBC News poll shows.


The White House telephone briefing with top members of Congress left many wanting a lot more details on the mission, as Britain chooses not to strike. NBC's Andrea Mitchell reports.


Fifty percent of Americans believe the United States should not intervene in the wake of suspected chemical weapons attacks by Syrian President Bashar Assad, according to the poll. But the public is more supportive of military action when it's limited to launching cruise missiles from U.S. naval ships - 50 percent favor that kind of intervention, while 44 percent oppose it.