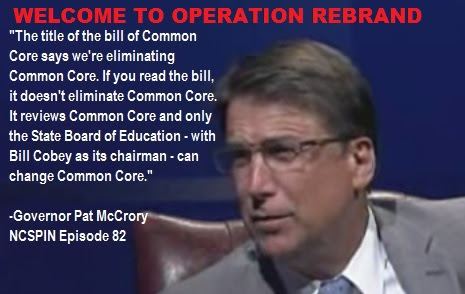 "Governor Common Core? Stick a fork in McCrory for 2016.
The Governor was already losing parents Right, Left and Center with his blind support of Common Core, but this rebrand he, Atkinson and Cobey are attempting to pull off? The Governor may have just put one of the biggest nails in his own 2016 coffin"

In the initial part of the conversation, McCrory made a weak dodge on testing and should be called out — all major tests are Common Core aligned. Hasn’t his Teach For America Alum and Education Advisor, Eric Guckian, told him that yet?

McCrory continued and here’s where the cat is now out of the rebrand bag: