Where the Black Flags Fly 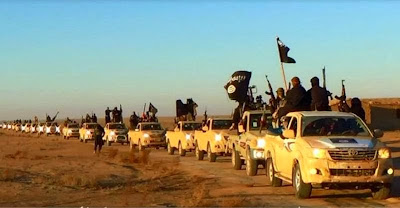 Media conveys immediacy, but it doesn't convey culture. Its famous flattening effect makes shoppers at a Staples in D.C. or a Whole Foods in Berkeley feel like they're right among the toppled buildings of Aleppo or Gaza, without actually giving them any insight into the motivations of the players.

It's been a while since Westerners lived in a society in which human life was truly worthless, in which no one trusted anyone else and it was easier to kill than not to kill.

Outside of a few urban centers in the Middle East where the elites start the revolutions that end up stringing them from the gallows, life is cheap and worthless. Men kill their wives and daughters over petty suspicions. Clans murder each other in vicious brawls. Wedding celebrations begin with firing guns into the air and end with bodies on the ground.

People are easy to make.