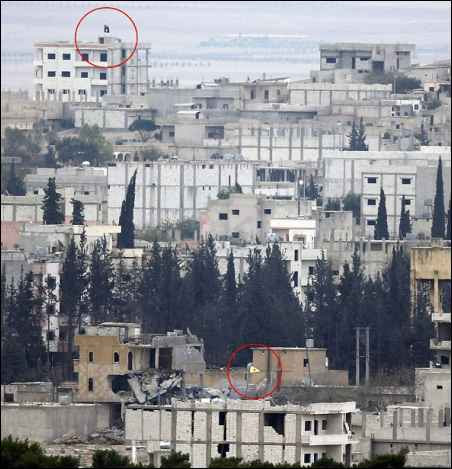 The chilling sight of the Islamic State's black jihadist flag is still visible in Kobani - despite Kurdish territorial gains and weeks of sustained airstrikes by American and Arab warplanes.

The Islamic State IS group was thought to have been pushed out of the centre of the besieged Syrian city after hundreds of brave Kurdish resistance fighters coordinated fierce street battles with coalition bombing raids - forcing the well-equipped jihadist to retreat into the outskirts of Kobani.

But this morning the group's black jihadist flag could clearly still be seen inside city, raised over a multi-storey building just a few hundred feet away from where the yellow, triangular flag of the Kurdish People's Protection Unit (YPG) could be seen fluttering above a largely destroyed housing complex.

IS militants have recaptured a village on a strategic hill overlooking the besieged city of Kobani in Syrian Kurdistan, according to eyewitnesses on Thursday, Rudaw reported.