"A martyr for the South, Henry Wirz" 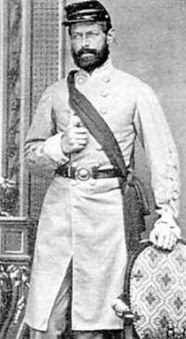 You may have read or heard me talking before about the American War of Secession (1861 – 1865) and its best known Swiss participant, Captain Henry Wirz, my great-granduncle.

His name is indispensably related to Camp Sumpter Prison, better known as Andersonville, Georgia. Captain Wirz was its commandant (1864 – 1865). After the war he was arrested, brought to Washington D.C. where he was brought to trial and sentenced to death for alleged war crimes and executed by hanging.

In 2011 the American historian Albert Winkler published an article in the „Swiss American Historical Society Review“, Vol. 47, No. 2, June 2011: Henry Wirz and Andersonville: The Career of the Most Controversial Swiss American. One of the key sentences is:

„The tragedy of Andersonville still discredits the nation, and many men in the Union and Confederacy must share the blame for the high death rates in that prison, but Wirz was unfairly singled out for punishment. Henry Wirz was a flawed man who did his best to alleviate suffering and safe lives at Andersonville, and he is no stain on the honor of Swiss Americans.”

In the meantime Albert Winkler wrote another article on this matter which was recently published in the „Swiss American Historical Society Review“, Vol. 50, No. 3, November 2014: Henry Wirz and the Tragedy of Andersonville: A Question of Responsibility. Please note the conclusion:

“With so much guilt to be shared, the prosecution and execution of Wirz was unjustified. Of all these men, Henry Wirz was probably the least responsible for the high mortality at Andersonville. In fact, he likely deserves high praise for doing for what he could to improve the desperate conditions in the prison, and he probably saved many Union prisoners who would have perished without his efforts.”

I again thank Mr. Winkler very much for his thorough historical research and for the permission to distribute his article electronically (please see attachment!).