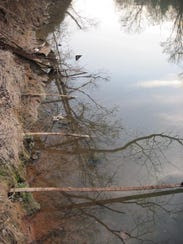 A local historian and urban archaeologist thinks he's solved a mystery: What happened to four Confederate submersibles known to be in Shreveport during the last two years of the Civil War, but missing in action since then.

Marty Loschen, director of the Spring Street Museum in downtown Shreveport, thinks he's found remnants of the hand-propelled craft in the banks of a branch of Cross Bayou about a half-mile west of where the Confederate Navy had a shipyard. At Cross Bayou's mouth on Red River, it was home to the leaky ironclad CSS Missouri and a fast packet, the Webb, whose presence overshadowed the humbler underwater vessels.