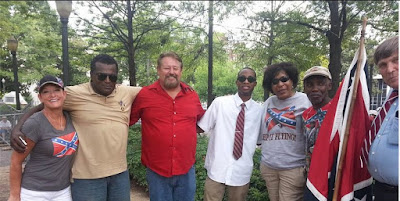 “I want the Birmingham Parks and Recreations board to know that they are ultimately responsible for this tragedy,” said Ginger Barbee, an attorney for the group that sponsored the event. “If they had not voted to remove the monument, this young, heroic black man would still be alive. They have caused so much racial division in a great city which has had very few racial issues since the Civil Rights movement. Anthony Hervey gave his life for something he believed in, reaching across racial lines to preserve history and protect our Constitutional rights… Our prayers go out to his family during this time. He will be remembered.”