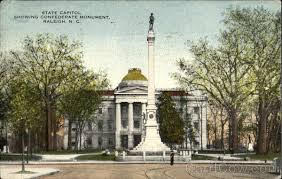 “On the 20th of May, 1895, the monument was unveiled in the presence of thousands of citizens of the Old North State who had gathered there to do honor to the brave men whose valor the monument perpetuates.

The monument was constructed entirely of North Carolina granite. The design is on the Corinthian order. It is over seventy-two feet high, with a base of twenty-eight feet. The shaft is a solid block of granite twenty-eight feet high, and is surmounted by a handsome bronze figure representing an infantry soldier.

On either side of the base is a life-size statue – one of an infantryman, and the other a cavalryman.

On the first base, which is six feet square, is a large die block and on its two faces are bronze medallions – one representing the seal of North Carolina, and the other the seal of the Confederate States.  This is considered to be one of the handsomest monuments in America.”

“Little indeed, must be the soul that grows morbid with misgivings and with malice at the reunion of the grizzled veterans of the Cause.

Let these old battle-scarred heroes have their times of revived associations and happy reminiscences. Let them march together on crutches and wooden legs, with empty sleeves dangling at their shoulders, and an occasional green patch over an eyeless socket.

Let them talk of the thrilling days gone by in bivouac and on battlefield. Let them compare notes of [Manassas] and Chancellorsville and Chickamauga and Gettysburg. They suffered enough, and showed courage enough in those perilous days to entitle them to all of the consolation they can get now out of stirring memories.

Small the soul and mean the heart that charges these valiant men with treasonable principles. They represent the flower of Southern manhood –as true and as brave a type as breathes the air of American freedom . . . The soldiers of the South are as loyal as any citizen of the land.

Having startled the world with an intrepidity of spirit, a dauntlessness of daring, a brilliancy of execution, and an almost marvelous capacity of endurance in the face of overwhelming forces, they surrendered in honor, and have been living through these years in loyal submissive not less heroic than their many successes which would have kindled Napoleon’s pride.

We of the South are proud of the records of those men who shouted about Lee and Jackson and Johnston and Gordon in those days gone by.

We are proud of their silent comrades who sleep in unmarked graves and in unkept cities of the dead. Some of us who were entirely too little to know anything about those dreadful days of war, have read the story with patriotic pride, and we rejoice to know that honor to the memory of the brave soldiers of our sunny South does not mean dishonor to a reunited country. – The Midland Methodist.”