Democrats Are Now Calling For A ‘Revolution In The Streets’ 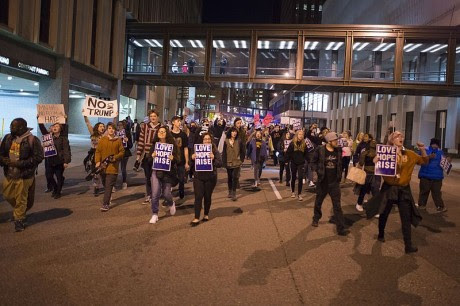 The surprise victory by Donald Trump on November 8th has spawned a series of violent protests and riots all over the nation as stunned leftists continue to throw the largest post-election temper tantrum in U.S. history.  Protesters in large cities all across America have been disrupting public transportation, looting stores, hurling objects at the police and burning Trump in effigy.  There have even been shootings at anti-Trump rallies in Seattle and in Portland.  Hundreds of protesters have been arrested so far, and organizers are promising that this is only just the beginning.  Meanwhile, large numbers of enraged leftists are physically threatening Trump on Twitter, and some are even calling for a violent revolution.  Sadly, I believe that they are quite serious about this.

Even some big celebrity names are starting to use the word “revolution” in messages to their followers.  On Twitter, Katy Perry has ominously warned that “the revolution is coming“, and comedian Sarah Silverman has boldly declared that “Trump gets a chance to hear us (or else we R them) If he fails REVOLUTION IN THE STREETS."

Of course other leftists are seeking less violent ways to oppose Trump.  There is a major push to use the electoral college to block a Trump presidency, if that fails there are many hoping to immediately impeach Trump once he takes office, and other activists such as former Labor Secretary Robert Reich are calling for a new third party if their planned post-election takeover of the Democratic Party is not successful.

But for many on the radical left the time for patience is over.