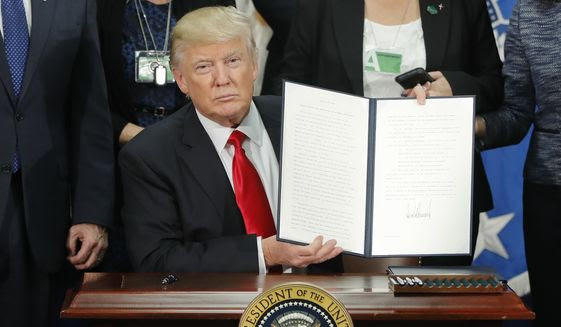 With a couple of strokes of his pen, President Trump wiped out almost all of President Obama’s immigration policies on Wednesday, laying the groundwork for his signature wall along the Mexican border, unleashing immigration agents to enforce the law and punishing “sanctuary cities” that try to defy federal law and thwart his deportation surge.

Left untouched, for now, is Mr. Obama’s 2012 deportation amnesty that is shielding more than 750,000 Dreamers.

But most of Mr. Obama’s other policies, including his “priorities” list that protected almost all illegal immigrants from deportation, are now gone. In their place is a series of directives that would free border agents to enforce long-forgotten but punitive parts of the law beyond the border; encourage Mexico to take a more active role in discouraging illegal migration; and close the loopholes that illegal immigrants have learned to exploit to gain a foothold in the U.S.