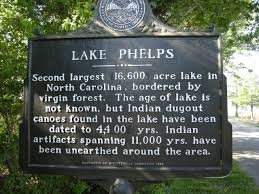 Each year in September, Pettigrew State Park celebrates Indian Heritage Week with a series of displays of Native American artifacts and demonstrations of their customs in honor of the original inhabitants of our state. This celebration at the park is possible because of the recovery of a remarkable set of Indian artifacts at Lake Phelps.

In the spring of 1985, an extensive forest fire in the vicinity of Lake Phelps was fought with water pumped from the lake, resulting in a lowered water level - much below what had been the normal level for some time. Dry weather during the remainder of that year and in succeeding years kept the lake level below normal.
In the fall of 1985, fishermen began reporting artifacts that were now visible on the lake bottom through the shallow, crystal clear water. A number of these, including partial and whole clay pots and stone objects, were collected and deposited at Pettigrew State Park. Artifact collection continued and in November of 1985, the first of a number of dugout canoes was discovered by park personnel. It was that discovery, along with the unusually well preserved artifacts, that focused attention on the archaeological potential of Lake Phelps and initiated a cooperative research project with the goal of understanding the secrets of Lake Phelps' past cultures. The on-going research program is a joint effort by the North Carolina Division of Parks and Recreation, East Carolina University, and the North Carolina Division of Archives and History.