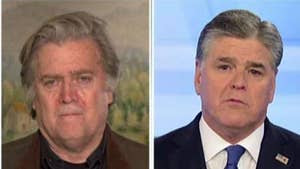 President Donald Trump's former chief strategist on Sunday called on American Jews to join his war on the Republican establishment.

Steve Bannon appealed to the Zionist Organization of America to "work as partners" in his crusade against GOP leaders he blames for blocking Trump's agenda. Bannon delivered the fiery address at the organization's annual awards dinner in New York, with several current and former Trump staffers in attendance.

"We're leading an insurgency movement against the Republican establishment," Bannon charged, blaming his adversaries in the establishment for playing games.

"That's how you get the Iran deal," he continued. "That's how we still allow the American government to finance people that have blood on their hands of innocent Jewish civilians."