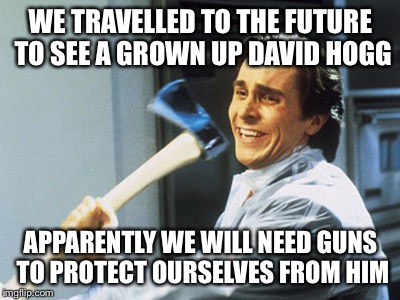 Perhaps boycotts have their place but going after another person’s livelihood for some innocuous statement, just because you have a minor disagreement, is not one of those places.


This seems a somewhat meaningless (and boring) tweet really, but apparently it sent Hogg, having recently discovered the ultimate rush of near monarchial power, into a tantrum such that he tweeted that all should contact Laura Ingraham’s advertisers and threaten to boycott them unless they dumped their advertising on Ingraham’s show. Really? Read more here.

If you don’t support boycotts based strictly on the temper tantrum of a prideful student activist, who is sadly being used by the American media to push an agenda, you can contact these advertisers to let them know that David Hogg does not speak for you, and express your disdain for Lord of the Flies-style leadership).

If you are an adult, or a mature youngster, find details below on how you can contact the advertisers in question, and support gun freedom and adult rule in North Carolina and in America.