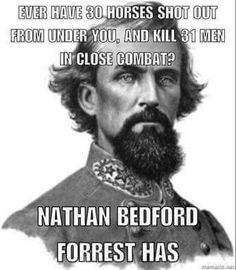 There are many examples of heroism that illustrate spiritedness in America’s history. Indeed, the American Revolution was won because of the indomitable spirit of the Patriots and a growing unwillingness of the British to put down the campaign for independence. The same spirit was present a century later during the War between the States. It is routinely acknowledged that Confederate commanders such as Robert E. Lee and Thomas “Stonewall” Jackson have achieved a significant place in American history for their military elan.

While Lee and Jackson immediately come to mind as exemplary leaders, perhaps the ultimate Southern military genius was an unschooled man of the Tennessee frontier. General Lee was to remark after the War that his greatest soldier was a man he had never met whose name was Forrest. And it was to this Achilles of the Confederacy that Andrew Lytle turned to begin his career as a writer. Certainly Bedford Forrest and His Critter Company appeals to the military historian, but additionally Lytle adds an important mythical dimension to Forrest’s career. Lytle sees in Forrest the heroic summation of nationalism and leadership; he shows both to be patriarchal and familial and, thus, reflective of the fundamental character of the Southern nation and the now obscure form of Confederate nationalism it represented.