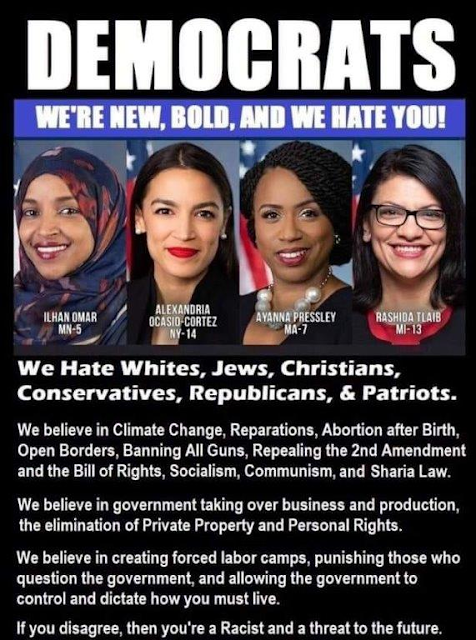 The Justice Democrats are a new radical fanatical branch of the Democratic Party. They are even too radical for Nancy Pelosi and that's saying a lot. California elects really obnoxious women as politicians. The last time anyone saw a group of four women the likes of Nancy Pelosi, Dianne Feinstein, Barbara Boxer, and Maxine Waters was when the curtain was going up on Shakespeare's play Macbeth and they were stirring a cauldron. But these Justice Democrats exceed the radical politics of all but perhaps Waters.

They are new, bold, and full of hate. They hate whites, Jews, Christians, Conservatives, Republicans, and Patriots. They believe in Socialism, Communism, Sharia Law, abortion after birth, climate change, open borders, reparations (but not for southerners who were victims of Lincoln's War of Northern Aggression), banning all firearms, repeal of the 2nd Amendment and Bill of Rights.

These "New Americans" believe in government taking over all business and production and the elimination of private property rights and personal freedoms (except for themselves). They believe in the construction of forced labor camps and punishment of all who question government authority and allowing the government to control and dictate the laws citizens (slaves) must live by. If you disagree that makes you a Racist and a threat to the future of America. Currently the most prominent outspoken ones recently elected by voters in Minnesota, New York, Massachusetts, and Michigan are Ilhan Omar, Alexandria Ocasio Cortez, Ayanna Pressley, and Rashida Tlaib. Many others of this ilk were elected to lesser offices in states and counties nation wide. Georgia barely missed the election of one for governor.

The Justice Democrats plan to elect many more in the 2020 elections. They want to give the right to vote to illegal immigrants, felons in prison, 16 year olds, and everyone they can deceive and indoctrinate with their brand of Marxist Socialist Communism. Karl Marx, Vladimir Lenin, and Saul Alinsky would be very proud of them. Will America's Constitution and Bill of Rights survive this coming Anti-American Tsunami? Many are the numbers of Americans who have already been deceived and indoctrinated. I am reminded of the song "Long Black Train" by Josh Turner. It sounds so good but I must Stay away. It's only destination is the middle of nowhere. The Devil's driving that long black train.