The Threat to Notre Dame: Monday’s fire was bad enough; the restoration could be worse. 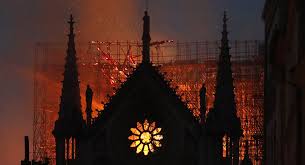 The monumental public buildings constructed using techniques to meet the challenges of our time include the Centre Pompidou, the Tour Montparnasse, the Opéra Bastille, the Musée du quai Branly, and the new Philharmonie, each one of which would gain at least an honorable mention in a competition for ugliest building in the world.

President Macron’s speech to the French nation about the fire that destroyed so much of Notre Dame contained a terrible threat: he said that the cathedral would be rebuilt, to be even more beautiful than before. This might seem an innocuous, even laudable aim, but the announcement of Prime Minister Édouard Philippe that a competition would be held to design “a spire suited to the techniques and challenges of our time” should send a chill down the spine of anyone familiar with the efforts of modern architects in Paris, the effects of which can be seen all around the city.